The History of Radio Fortuin in Holland.

Sir Anton H.L. Fortuin started his first radio shop in the Wagenstraat adjacent to the Bierkade as Radio-Service-A.H.L. Fortuin in 1926.

In 1951 he relocated from the Wagenstraat to Westeinde 17 right next to the well-known theater-café Amecitia.

The current co-entrepreneur Mr. Gerald Ligthart came into service with him in 1968, and in 1971 continued the enterprise. In 1972 Radio Fortuin moved to Westeinde 193-A next to the old Westeinde Hospital entrance where they are currently still located. 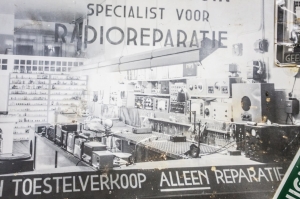 1986, together with Willem van Ette, Gerard Ligthart opened the branch at the Regentesseplein,

where Car Audio and Electro Shop Fortuin are also located since 1992.

John van der Togt, after working as a mechanic for 5 years, joined the Westeinde branch in 1990 as a business  partnership holder.

Then, in 2000, Arnold Ligthart took over the partnership at the Regentesseplein branch from his father.

Mike Ligthart took also took over his father’s partnership at the Westeinde branch in 2015.

Both branches have specialized in things other than repairing audio, video and hotel-hospitality equipment